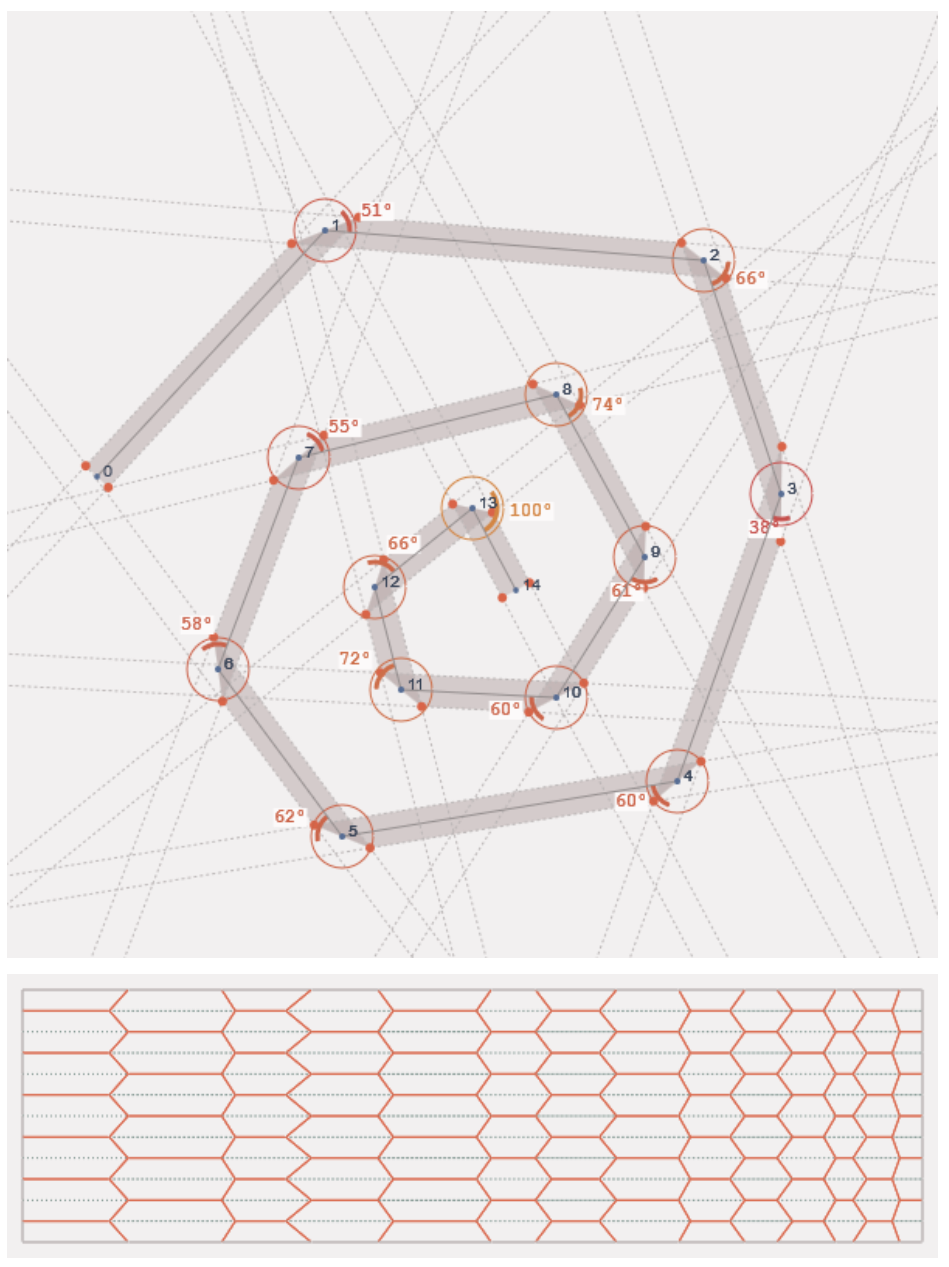 A drawing tool that creates Miura-ori crease patterns from an arbitrary, user-defined cross-section. You can try it out at the following URL.

Miura-ori are an interesting form of rigid origami initially discovered by Koryo Miura. They are “rigid” in the sense that they can transition smoothly from an unfolded state to a folded state without any bending or shearing of the parallelogram faces. They were even used by the Japanese space program to build deployable solar panel arrays! A “semigeneralized” Miura-ori (a term coined by Robert Lang, I believe) is a Miura-ori with an arbitrary cross-section. From Lang’s book:

A semigeneralized surface can take on any arbitrary cross section in one direction, but it exhibits strict periodicity in the other (which is the reason for the “semi” part of “semigeneralized”).

The shape of the cross-section is called the generating line for the Miura-ori. It is a piecewise-linear path in 2-dimensional space (often referred to as a “polyline” in many graphics libraries). We start by expanding the generating line along a vector orthogonal to each of the constituent line segments. This forms the generating strip, which is essentially the silhouette of the final, folded form. In order to convert this strip into a rectangular crease pattern, we have to “unwind” it as follows:

The procedure outlined above generates the topology (i.e. geometric “structure”) of the crease pattern, but it doesn’t actually handle the assignment of the creases. Per Chapter 2 of Lang’s book, we will refer to creases running along the horizontal direction as minor folds and creases running along the vertical direction as major folds. Creases should be assigned as follows:

Bird’s-foot vertices are degree-4 vertices with 2 consecutive smallest sectors, where the shared crease between these two sectors is a mountain fold, and the other three creases are valley folds (or vice-versa). A single bird’s-foot vertex is show in the crease pattern below:

Ultimately, the tool exports a .FOLD file, which contains a description of the vertices, edges, faces, crease assignments (mountain vs. valley fold, etc.), and target fold angles that form the resulting crease pattern. This file can then be loaded into a rigid origami simulator, such as Amanda Ghassaei’s, which simulates the folding of the crease pattern in 3D space.

Use your mouse to add points in the upper canvas. The points will be connected to form a polyline, which, in turn, will be used to generate the Miura-ori crease pattern (displayed in the lower canvas). Additional controls: